2018 is shaping up to be a monstrous year for Stone Sour. Having been on the road with Steel Panther, and plans being announced to tour with Ozzy Osbourne, Stone Sour have announced a new line of headlining tour dates during the month of May.

Primarily sticking within the east coast and midwest, Stone Sour looks to make it a month to remember, with support by Palaye Royale, The Bronx, and ’68.

Getting back on the road is special thing for the band, after word spread that guitarist Josh Rand had stepped away for treatment of unknown issues. With that issues seeming to have passed for the time being, Rand is back in the swing of things and ready to rock n’ roll.

“[Josh is] doing great,” said singer Corey Taylor. “We actually have a two-month break coming up after this tour, so he’s actually been able to work through the things that he’s going through right now,” Corey said. “And, yeah, he’ll be ready to go for the next tour, which is… I think April [27th] is the first show.”

“I’ve been in a band with for a while; we’ve been best friends since we were 15 years old — I mean, we go way back. For me, it’s not just the worry of my cohort, my partner, my songwriting guy, my lead guitarist, it’s about worrying about my friend, my brother, somebody who let me sleep on his floor when I was homeless,” he said. “So, for me, that’s the biggest thing — worrying about him. But he seems to be doing really, really well. And, like I said, we talk every day, he’s letting us know how he’s doing. And we just support him as much as we absolutely can. And when it comes to being a friend, that’s all you really can do — just be there for them. The best way to be a friend is just to stay right where you are and just let somebody lean against you if they need it, and that’s what we’re trying to do.” 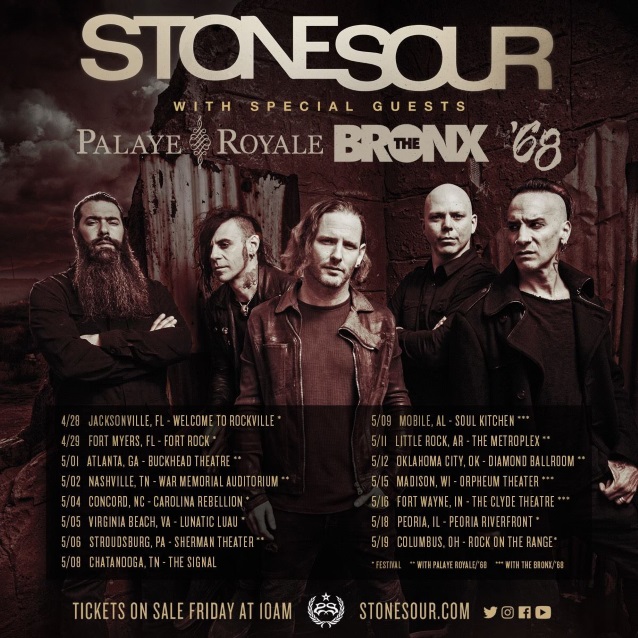 The two best times to catch a tour are opening night and the last night. …

Corey Taylor Praises Ozzy Osbourne For His Influence and Inspiration

Stone Sour has released a demo version of the song “Idle Hands”. Josh Rand:”Back in …